All the dongles I bought for my new USB-C 2016 MacBook Pro — how annoying will it really be? 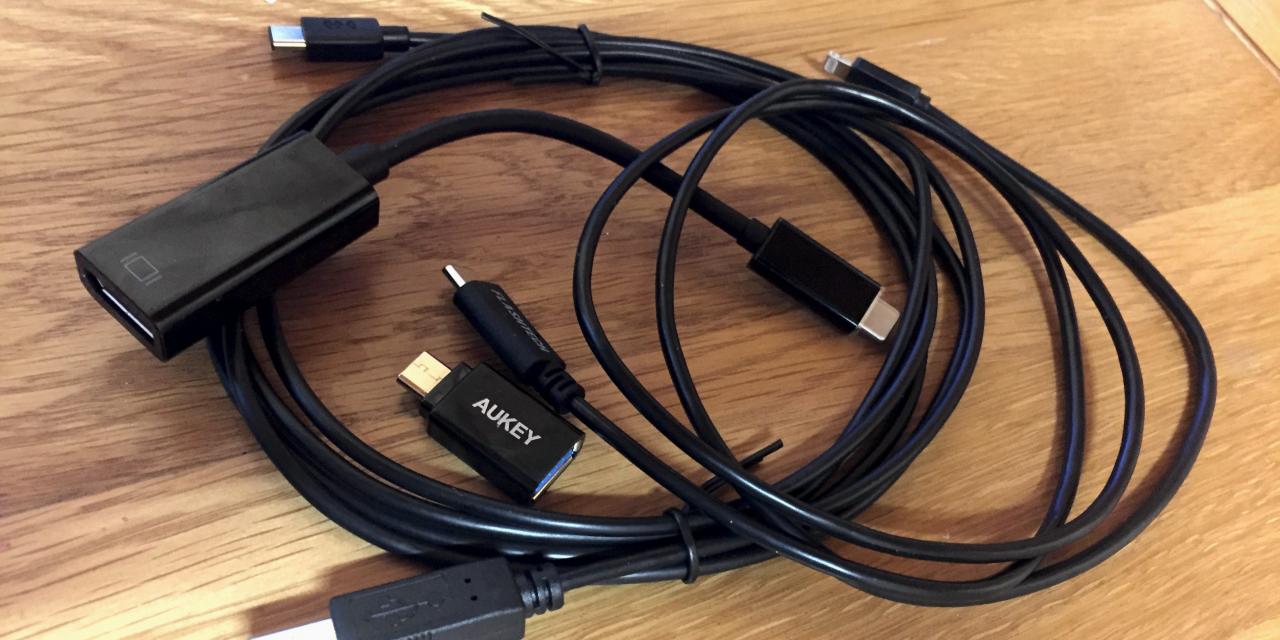 The new MacBook Pros have certainly caused an uprising of controversy, with perhaps the lack of any traditional USB ports causing the most public outcry. Following in the footsteps of the one-port Retina MacBook, the new 2016 MacBook Pro lacks traditional USB-A ports, instead featuring up to four USB-C ports. Although the ports are highly more capable, offering Thunderbolt 3 speeds on a reversible small connector, it effectively means that all current Mac accessories and peripherals are incompatible without some kind of adaptor.

In preparation for my new MacBook Pro arriving, I’ve ordered what I think I will need in terms of dongles for my uses. After seeing it all laid out on the table, I generally feel like the negative criticism is overblown …

To be ready for the new MacBook Pro (I ordered the base 15-inch Touch Bar model), I’ve already bought the dongles I need to do my work. Having not owned either generation of the USB-C Retina MacBooks, I pretty much started from scratch in terms of USB-C accessories. I was initially thinking that this was going to be a significant hassle (albeit a necessary tradeoff as part of being a Touch Bar early adopter) but after buying everything, it really doesn’t seem that bad.

Here’s what I bought and why.

I use my MacBook Pro during the week as my primary computer. This happens at a desk connected to an external display. Currently, I do this using a mini DisplayPort cable which is not compatible with the 2016 MacBook Pro on its own. My display does not have USB-C inputs so I needed a DisplayPort dongle. I bought this USB-C to full-size DisplayPort dongle for $12.

As a developer, I connect iOS devices frequently to the Mac using a wire so I picked up a Lightning to USB-C cable for development. Outside of work, I never connect my devices with a cable so I’m not even sure this would have been a priority purchase for me: I use iCloud and Wi-Fi for syncing data and apps, and I charge with the array of iPhone power adaptors and docks that I already own. It was under $10. (I bought this before Apple’s USB-C adaptor price cut, see below).

My Rode Podcaster microphone, which I use to record 9to5Mac’s Happy Hour podcast every week, currently connects via USB-A to my 2012 MacBook Pro. I was initially thinking that I would need a USB-C dongle to attach to the end of this, but it isn’t actually necessary. The mic cable is detachable; it plugs into a USB-B port on the mic itself and terminates as USB-A. This means I simply needed a USB-B -> USB-C cable to replace the existing cable, which I can plug directly into the mic and the new MacBook Pro. I bought this Cable Matters cable for $7.

For reasons that go beyond the scope of this post, I use a wireless keyboard and a wired mouse. The Bluetooth keyboard will work with the MacBook Pro just fine, so I only needed to think about mouse connectivity. Unlike the podcast mic, the mouse cable does not detach.

With the goal being to avoid as many dongles as possible, I initially looked for a brand-new USB-C wired mouse. I couldn’t really find anything suitable apart from a couple of mini travel mice; I think this speaks to the infancy of USB-C in general. In time, I’m sure there will be more manufacturers making PC peripherals with integrated USB-C. For now, though, I’ve had to buy a USB-A to USB-C adaptor (2-pack for $8). It’s tiny (only a couple of centimetres long) and cost just $4.

In total, I spent under $50 on everything. As a quick aside, I bought all of this stuff from Amazon because I didn’t want to spend a lot of money, it was easy to buy everything from one site and I prefer black cables over white ones. I also bought this stuff before Apple slashed prices on the USB-C accessories it sells; I’ll probably pick up an extra official USB-C adaptor whilst they are on sale for just $9.

In general, it doesn’t seem too bad. For the display dongle, it’s more awkward than what I had before but it’s not terrible. The dongle will stay attached to the cable at my desk, so I’m still just plugging in one cable when I sit down with my laptop. It’s just the cable that is a bit clunkier now with the dongle attachment.

Similarly, with the mouse, the USB-C adaptor just snaps on the end of it. I can just plug it in to the 2016 MacBook Pro and simply pretend it is one single cable. I could also invest in a wireless mouse which would solve this problem and have other conveniences; wireless is obviously what Apple wants to promote.

The situation with the USB-C microphone and Lightning cables isn’t that different from what I have today. I’m just swapping out cables that I already have to own with different ones that I already have to own. There are no add-on dongles or adaptors necessary here at all. The USB-C Lightning cable can’t be used with my Apple USB power adapter, I guess, but I have a separate dedicated cable for charging. This cable is solely used to connect to my MacBook.

When the new laptop is delivered, I’ll simply remove the Lightning -> USB-A cable and replace it with the Lightning -> USB-C one. The same is true for the mic; I’m not having to bear any additional dongles or inconveniences aside from the outlay to buy the new cable, once.

I also recognize that this transition is only going to get easier with time. I’ll slowly own more and more USB-C stuff, reducing the frictions until its just standard to expect USB-C on everything. There’s also the future potential of buying a USB-C ‘hub’, like this one recently announced by OWC, where you can connect many accessories to the Mac (and charge) with a single cable. This setup would actually give me more convenience than what is currently possible (MagSafe can’t double up as a port for data transfer).

There’s also the raw bandwidth benefits to consider when future devices take advantage of the 40/Gbps Thunderbolt 3 speeds. In conclusion, I do not think going all USB-C on the new MacBook Pros is a deal breaker or a huge misstep by Apple design as some have characterized it. Needing to buy $50 of cables is annoying, no question, but it’s only something I have to do once; there is negligible ongoing inconvenience.

Moreover, there are real tangible benefits to Thunderbolt 3 USB-C so I’m happy that Apple is brave enough to push the industry forward. Just one USB-A port on the new MacBook Pro would have prolonged the transition away from old, slow, big USB 3 ports significantly; including none at all is a big statement. At the end of the day, this transition seems inevitable … so you might as well get started sooner rather than later.