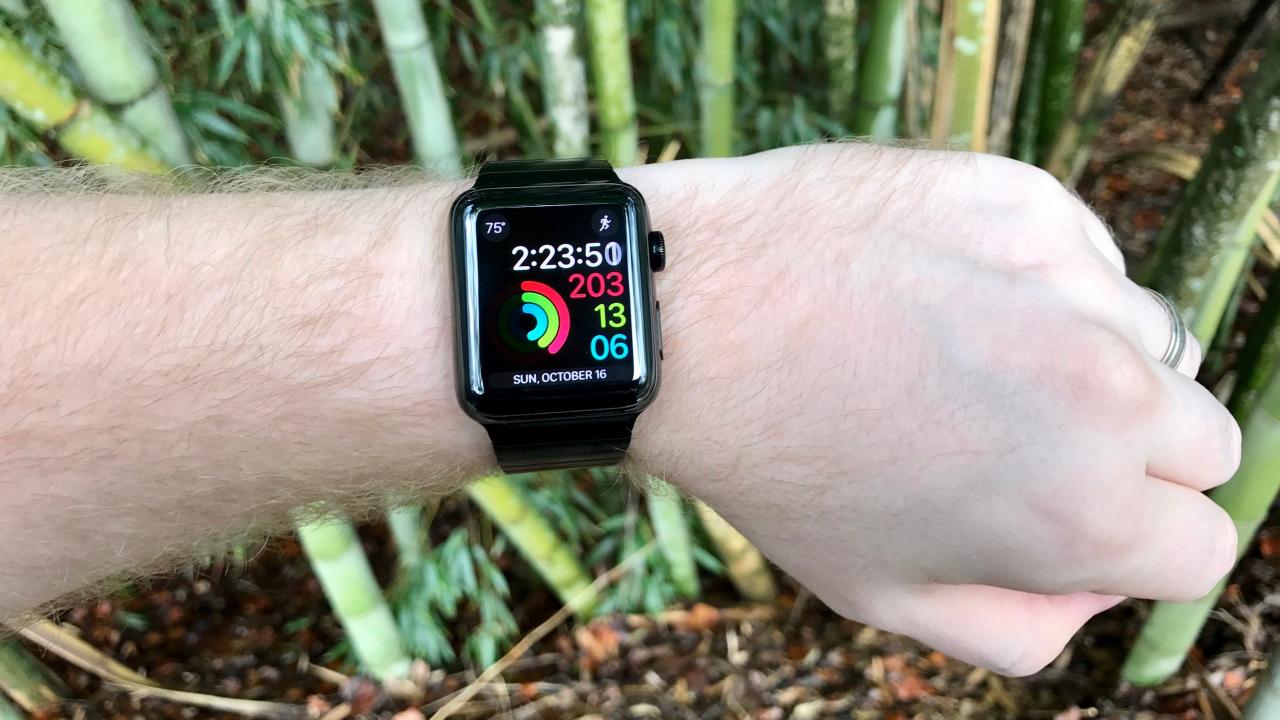 Shortly after the Apple Watch Series 2 release last month, I gave the second-generation version model a fairly detailed review that I was pleased with noting the benefits of GPS and waterproofing like unlocking new workouts and other capabilities. Testing included open water swims, outdoor cycling without iPhone, and battery life observations during regular use. In the month since publishing, I’ve noticed a few things worth following up with…

First, I’m enjoying the built-in GPS much more than I ever expected. It’s unfair to say that the GPS is the only difference between the original model and the new Series 2, but even if it was it can make a significant difference in how useful Apple Watch is to you. Sort of like 3G coming to the iPhone after the first-generation model.

I’ve started running somewhat regularly (0.4 miles then 0.8 miles then 1.6 miles each time and going) with Apple Watch Series 2 — sometimes with iPhone and sometimes without — and I have to admit it’s really convenient to have the option to leave the iPhone behind. My primary objection to always doing this still remains: I don’t want to get caught without my iPhone during an emergency. But when I’m taking an outdoor jog with my family and my wife or mom has their iPhone, I feel OK about going without mine.

There’s one thing I mentioned in my initial review that I partially got wrong. I highlighted that there’s no apparent benefit that extends to the Maps app, but I recently discovered one super useful benefit indeed.

I was traveling out-of-town in a rental car with no USB port or car charger handy, going to a location that I’ve never visited before, relying on Maps for directions. After a long day of travel, my iPhone died just before I arrived, but my Apple Watch Series 2 was also following along with directions on my wrist.

Despite losing a cellular connection when the iPhone’s battery was drained, Apple Watch continued keeping up with my location and updating along the route to my destination. Once I arrived at the destination, Maps knew it and ended the route but by then I got where I was going and didn’t need a new route.

This is the same concept as what Apple showed on stage at its keynote with the third-party Viewranger app — using GPS to navigate pre-loaded routes — and it’s good to learn that it extends to Apple’s own Maps app. Future versions of watchOS could benefit from saving multiple, pre-loaded routes that the GPS can use.

Open water swimming still results in somewhat spotty GPS tracking; this just might be the nature of using the GPS in environments like the beach. At any rate, it’s an area to continue watching.

I’m also curious to see if Nike+ Run Club has a bigger update for Apple Watch planned or if the superior version will be saved for Apple Watch Nike+ which 9to5Mac recently got to check out.

The Nike+ Run Club app on Apple Watch currently doesn’t use the GPS on the watch to map runs, and bringing your iPhone along only maps the run in Nike’s app, not Apple’s Activity app. Ideally, you could run with any Apple Watch Series 2 and Nike+ Run Club would map your run in both Activity and the NRC app which has a superior route view.

Another point I mentioned was underwhelming battery life on watchOS 3 and Apple Watch Series 2 compared to watchOS 2 on the first-generation Apple Watch. The software update was out of beta and my Apple Watch wasn’t lasting nearly as long as before. Friends and family voiced the same complaint about their own Apple Watches after watchOS 3.

A few days after my initial review, watchOS 3.1 was released as a developer beta and I’ve been running the latest versions of it since then. We’re now on the third beta version of the software update and I can report that I’m experiencing the best battery life on Apple Watch I’ve ever had. Hopefully watchOS 3.1 is released to everyone soon.

With moderate use and at least 30 minutes of active workouts each day, I’m seeing about a day and a half of use on a single charge. That compares to hitting power reserve before bedtime prior to watchOS 3.1 with Apple Watch Series 2. I think lighter users could probably see a full two days and charge every other night if needed.

I still can’t hit a full two days of battery life (although I could maybe get close if I didn’t log workouts), but in one instance I saw 26% battery life remaining after a full 24 hours of active use (it was a long day). This is also with brightness turned up to the highest level (the third level versus the default second level) and the screen wake on tap setting set to 70 seconds versus 15 seconds.

My last observation for now is about increased water resistance and that speaker trick that ejects water. I highlighted in my review that it works as advertised after a swim in the ocean. I was able to place a phone call, record my wife a voice message, and confirm with voicemail transcription and the audio recording that sound wasn’t impacted at all.

Apple Watch Series 2 is designed with getting the speaker wet in mind. Any time you log a swim, the display locks out touch input to avoid water acting as a tap, and ending a water workout initiates a short tone that pushes lingering water out of the speaker cavity. As I noted, you can also manually invoke this audio tone at any time to eject water from the space around the speaker.

While I didn’t experience any issues with this with open water swimming, I’ve since stopped wearing my Apple Watch in the shower (which is probably best anyway) because the speaker tends to sound tinny and metallic for several hours even after invoking the water ejection trick multiple times.

This is a bit surprising as my water pressure is rather low and Apple Watch is fully submerged in the ocean. The speaker hasn’t been damaged, it recovers after a few hours of drying, but it’s noticeable enough that I just take it off before showering again. 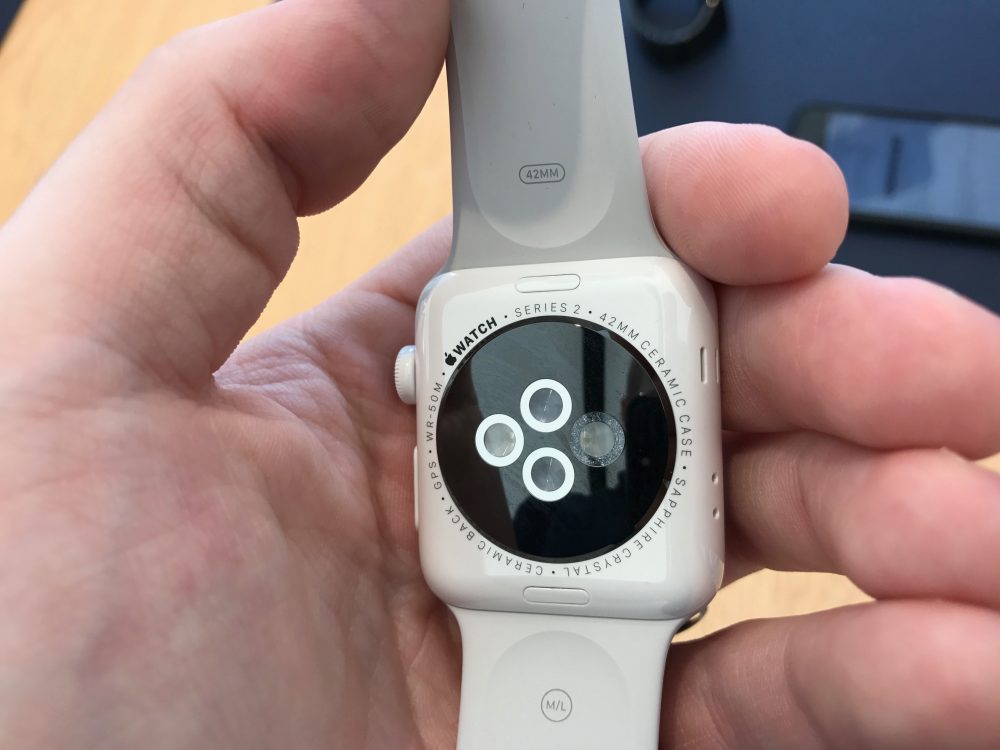 I still haven’t had the opportunity to test pool swimming with Apple Watch Series 2, only open water swimming. It seems my only option for pool access is a pricey membership to a local pool a town over and I haven’t made that committment just yet. Stay tuned for a future installment on that experience when I finally make the plunge.