Apple has repeatedly said over the years that it will never make a touchscreen Mac, but that’s never deterred concept designers, and Swiss site HandyAbovergleich is the latest to join the fun.

The site has put together some admittedly beautiful images of a Mac Apple will never make, envisaging not just a touchscreen, but a touch keyboard and full-width trackpad too …

Steve Jobs first explained why Apple had rejected the idea of a touchscreen Mac.

Touch surfaces don’t want to be vertical. It gives great demo, but after a short period of time you start to fatigue, and after an extended period of time your arm wants to fall off. It doesn’t work, it’s ergonomically terrible.

Jony Ive said last year that Apple had rejected a touchscreen Mac ‘many, many years ago.’ Phil Schiller later expanded on this, saying that Apple had actually tried it.

Apple came to this conclusion by testing if touch screens made sense on the Mac. “Our instincts were that it didn’t, but, what the heck, we could be wrong—so our teams worked on that for a number of times over the years,” says Schiller. “We’ve absolutely come away with the belief that it isn’t the right thing to do. Our instincts were correct.”

But the launch of the Touch Bar on the MacBook Pro, and reports of Apple’s interest in fully-dynamic keyboards, have kept the idea alive.

The focus is clearly on the completely new display and the touch screen on the bottom, which replaces the keyboard.It creates a completely new and extremely modern-looking MacBook , but still looks like one and does not lose the character of the popular Apple computer.It can be considered the next generation MacBook Pro Retina 2016.

It also includes an edge-to-edge trackpad, support for the Apple Pencil – and, just for good measure, a 17-inch screen.

Our designer gives the MacBook Touch a Retina OLED display with the usual high resolution , but now in even larger format thanks to the vanishingly small screen margins .This fits without problems a 17-inch display in a similar form factor as that of today’s MacBook Pro 15-inch.

The touch-sensitive keyboard – which would of course be a truly horrible typing experience – can double as a secondary display. 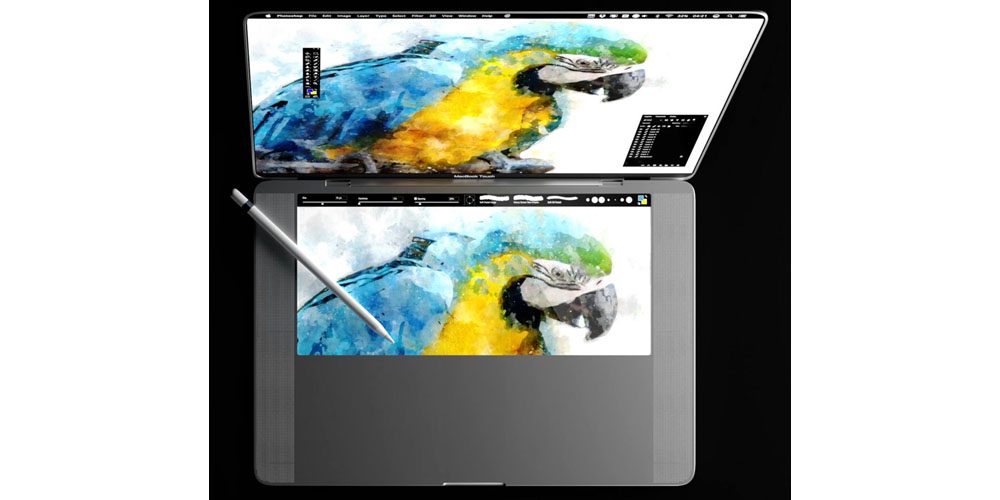 The machine is never going to happen, but it’s at least a beautifully-realized fantasy. Personally, I love the almost 1:1 mapping of the huge MacBook Pro trackpad, and think I would actually like to see it a little wider – though not full width. How about you? Share your reactions in the comments.