When you think of a phone, you’re probably imagining something wide, larger-screened, beefy. This thing I’m holding is more like an old iPod. It feels like a heavy, polished stone.

That’s probably because it really is, basically, an evolved iPod. In fact, that’s one-third of the tech trifecta that Steve Jobs pitched when he unveiled the original iPhone at the MacWorld keynote on Jan. 9, 2007: “A widescreen iPod with touch controls; a revolutionary mobile phone; and a breakthrough internet communications device.” The punchline? It wasn’t three separate devices, it was one breakthrough handheld that did it all. 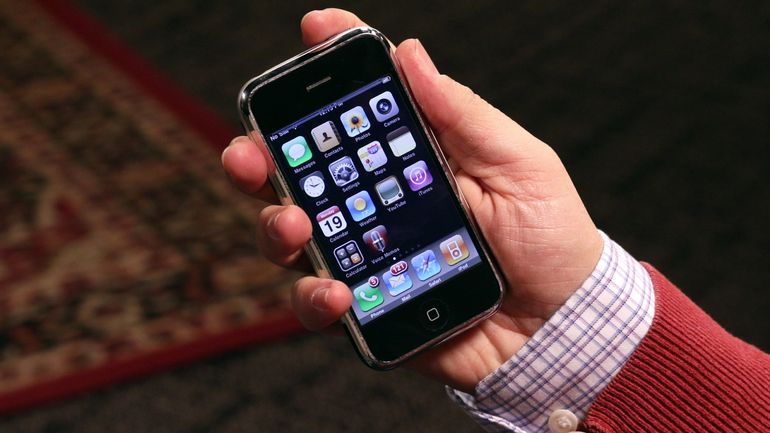 It was different, it was bold. How is it now? Ten years later, we dug up the original iPhone to give it another spin.

I bought this iPhone back in the summer of 2007, right before I got married. I took it on my honeymoon. I wrote my wedding speech on it. After I used it, my wife had it. When I dug it back out of storage, it was sticker-covered and missing a few pixels. But 10 years later, it still turns on. It still (mostly) works.

I lived with it for a week — well, sort of. I couldn’t get it to accept a SIM card, so it was a Wi-Fi-only affair. But spending a few days with the original iPhone made me realize just how different that early phone world was — and how much current tech we take for granted.

What’s different: The shocking world of 2007

The iPhone was unveiled in San Francisco in January of 2007, and went on sale in June of that year. The AT&T exclusive was competing with such state of the art products as the Palm Treo 700, the BlackBerry Curve 8300, the Samsung Blackjack (running Windows Mobile!) and the Nokia N95.

With no physical keyboard, the touchscreen iPhone rewrote the rules of the game. But 10 years on, touchscreens are so normal that it’s hard to imagine how new it was.

Seriously, it was small (and thick). The first thing that strikes anyone who picks up the original iPhone is how small it is. Phones just aren’t like that anymore. Those curved sides are familiar: they’re a bit like the Apple Watch, but on a larger scale. Curved chrome edges and a matte aluminum back give it a classic look.

It needed your computer and iTunes (a lot). The original iPhone needed to plug into a Mac to update software or transfer music or back up data. It didn’t sync information to iCloud — or “Mobile Me,” as its precursor was called. It wasn’t independent. It was a wireless, phone-connected iPod. (That’s why I had to use it on Wi-Fi only — because it wouldn’t fully work with my Mac anymore to initiate the SIM setup process.)

It didn’t have an App Store. The first iPhone couldn’t download apps. It was stuck with the built-in ones Apple included. But my old iPhone has an App Store because it was later updated to iOS 3. Still, most apps don’t work anymore. iTunes crashes, and while the App Store lets me browse apps, I can’t download any – most ask me to install iOS 8, which I can’t.

It only has AT&T Edge cellular service. If I had been able to get this iPhone up and running on a cellular network, I’d be stuck with 2G data speeds on what was then called AT&T’s Edge network. 3G speeds didn’t arrive until the second-gen iPhone 3G in 2008.

Even Wi-Fi is slower. 802.11 b/g was the best it got. On my office and home Wi-Fi, it lags well behind my iPhone 7’s LTE connection. Safari works… but it’s so, so slow.I load Google. I try loading CNET. I wait for a story to appear. NY Times, ESPN: The web’s no longer built for old Safari. But I remember how even loading the internet at all on a tiny mobile display seemed like magic at the time. Facebook’s app works, but I try logging out, and the process takes so long that I put the phone down to get a coffee.

No GPS. Google Maps still works on the original iPhone, and it can approximate location by cell towers and Wi-Fi hotspots, but it can’t do turn-by-turn navigation while driving. That hadn’t arrived yet.

No Siri. That didn’t arrive until iPhone 4S.

Check out that recessed headphone jack.

No smarter Bluetooth. The 2007 iPhone had Bluetooth, but it couldn’t link to a smartwatch or send out notifications. Bluetooth didn’t allow smart accessories yet — it was mainly used for audio.

Its headphone jack was weird. The original iPhone used a 3.5 mm headphone jack when many phones at the time where using smaller 2.5 mm ports or proprietary adapters for headsets. But in a strange design decision, Apple recessed the jack so far into the body that only long, thin headphone plugs worked. When I used the 2007 iPhone, I bought a Belkin extension dongle separately. Some things don’t change. But at least it works with modern EarPods.

A small, small screen. The iPhone’s display feels so small — just 3.5 inches, measured diagonally. That’s smaller than a credit card (which is 4 inches). And that screen just doesn’t look good. Sure, it’s 10 years old. But the colors look so washed out compared to new iPhones. Apple’s older app design in iOS 3 is less vibrant, more muddled. But it still functions, except for a row of nonworking pixels near the top. Viewing angles are seriously compromised, though. I load up a few episodes of “Jericho” and CNET’s Digital City podcast via the iPod app (they were still on my iPhone), and they all look really muddy in night scenes. Blacks and grays blur, and if I tilt the iPhone to the side a bit, the picture disappears.

No flash. No selfie. No video.

Seriously basic camera. The original iPhone had a camera. That camera could only take still shots: no video. This camera app didn’t have any “features.” You couldn’t zoom, even digitally. You couldn’t edit photos. There was no flash. You could do this: snap a shot, and send it to someone. That’s it. And by “send it to someone,” I mean email. Also, the original iPhone didn’t have a front-facing camera. Did I mention that yet? Selfies didn’t exist.

A new outdoor photo with the original iPhone makes NYC look like the 1970s.

Compared with the iPhone 7 Plus, the original iPhone’s photos are fuzzy, hazy, blurred, like an impressionist painting. It can’t focus on close-up objects, and lots of details get washed out.

And yet, when I posted a photo to Facebook (Facebook’s app, still on my iPhone, let me send a photo after I waited for several minutes), someone said, “It’s surprisingly… OK?”

Many apps don’t work anymore. I click on the brown TV-shaped YouTube app. It won’t load either. Welcome to today’s internet for yesterday’s gadgets. And I found email unable to connect to my accounts. I couldn’t connect with one of my work Wi-Fi hotspots. Functions were broken everywhere.

Typing is rough. That tiny, tiny on-screen keyboard pops up and all the keys look like Tic-Tacs. I make a number of typos. I remember, vaguely, that I used to learn to trust autocorrect as I jabbed away with my thumbs: iPhone typing was more about a shorthand. I somehow wrote my whole wedding speech on my iPhone in the Notes app. I’m not sure how I did that.

And yet, the iPhone was also far ahead of its time

Of course, who would expect a decade-old product to feel fresh and new? None of those flashbacks to the early days of the iPhone were a surprise. What was somewhat shocking was just how familiar and modern the old iPhone felt. For a 10-year-old phone, that’s amazing — and a testament to just how groundbreaking the product was. And is.

Its size is perfect. Aside from a small screen, the original iPhone feels amazing. I can grab it easily, and swipe all across the screen with one thumb. It’s comforting and solid. iPhones, now, feel wide and fragile by comparison.

Basic buttons are familiar. There’s a Home Button, a power button and headphone jack at the top. Side volume buttons. And a proprietary Apple jack which requires a specific cable to charge. The only difference is that it needs a wide 30-pin connector, not Lightning.

That touchscreen works mostly the same. Going all-touchscreen was an amazing feat in 2007, so much so that people gathered around to see it for themselves. The iPhone still handles touch pretty well, and its basic touch language is still the same 10 years later. The iPhone now has pressure sensitivity, advanced haptic feedback, and more touch gestures. But Apple nailed that basic interface right from day one — including the iconic “pinch and zoom” — and defined it for everyone else.

It’s a great music player, but with just 8GB of storage. Music is great, though — maybe the best thing about the original iPhone. Thanks to the iPod app and a pair of Apple earphones, music sounds better than even my current iPhone. Maybe that’s because there are decent quality MP3s on it instead of streamed music. Of course, you can’t store much. 8GB is the phone’s total storage, so you can have maybe a thousand songs, more or less? In fact, the entry-level 2007 model was a mere 4GB. iPods at the time were 60GB and more. I kept dreaming of an iPhone large enough to hold my collection of ripped CDs. That time arrived recently thanks to the 128GB iPhone, but by then everything was in the cloud.

Pandora still works, too (but not in the background). They Might Be Giants radio plays with a track called “Cells” from Here Comes Science. It sounds great. It loads pretty reasonably. But I leave Pandora and am surprised to find that the song stops playing. This iPhone can’t run apps in the background.

Google Maps feels pretty decent. The traffic patterns flow in, though. I see Manhattan in satellite mode. This still feels close to what exists now. Two-finger taps and zooms work, but I can’t rotate the map with my fingers. Still, this was absolutely revolutionary to have back in 2007, and nothing else at the time came close. 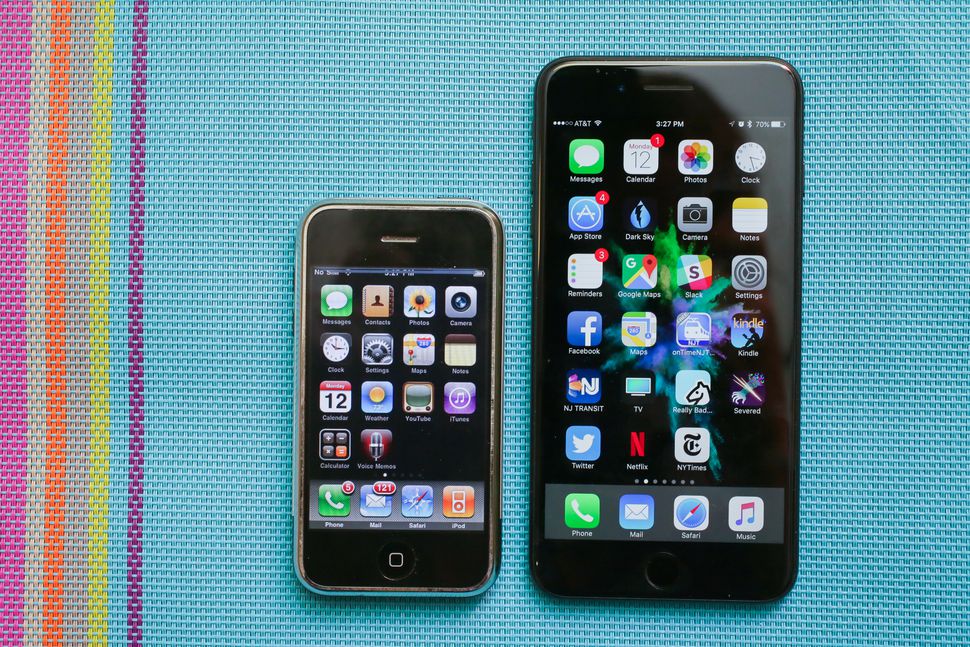 I switch back to the iPhone 7 Plus, the phone I use most days. It’s massive, like a diving board. But it’s so thin, its display so fantastic and bright. And it’s absurdly fast. Apps melt together, I switch through screens and functions instantly. It’s a learned behavior.

In 2017, the iPhone is the computer. It’s everything. It isn’t tethered to a laptop anymore — there’s no home base. The cloud is its syncing partner. Everything runs directly to it. And so do we. Rather than the iPhone being a peripheral, peripherals now exist for it: fitness trackers, headphones, cases and chargers. Not to mention the Apple Watch.

I look at the Apple Watch on my wrist. It’s small, bulbous, and a little limited. Is this tiny thing going to be what the iPhone once was? Maybe not. But it reminds me more of the original iPhone than the new iPhone.

Then I look back at that old iPhone, the one I used to rub nervously in my hand. That smooth screen. I still do it sometimes. Clicking the home button. We all do.

The iPhone was the moment I started sending things along to others more automatically. I started checking the news, the weather, emailing, keeping a little gadget in my pocket that could be my survival tool. I’d never be alone. It was a unique thing among weird phones, BlackBerrys, hobbled semi-smart devices and aging PDAs. There were Palm Treo phones and smart pocket computers, but everyone on the subways and in the streets had an iPod. The iPhone was both, and that’s what made it cool. It felt like a secret party trick.

Now, everything’s connected. We’re inundated with communication. To be disconnected is a fantasy, or an anxiety. I try to keep the phone in my pocket more. But I usually don’t succeed.