Review: Mujjo, the felt and leather sleeve for the new MacBook Pro (plus iPad) 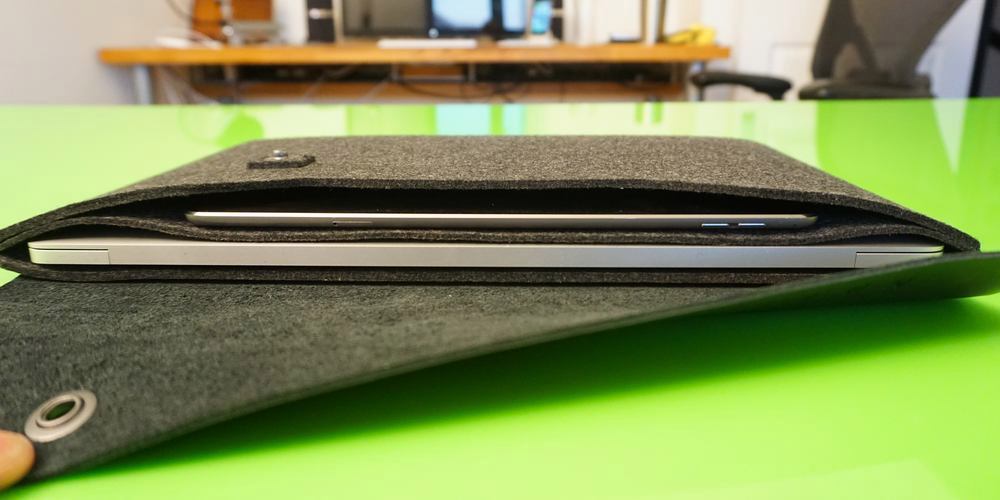 Taking delivery of my shiny new 2016 MacBook Pro also meant I needed a new case to protect it from getting scratched or marked. I frequently carry it inside a bicycle bag, where London’s pot-holed roads would mean it bouncing around a little, and it also travels with my in my hand-baggage when I fly.

I’ve previously used TwelveSouth’s BookBook cases. These offer a high degree of protection in an admittedly slightly bulky form, but the company doesn’t yet have versions for the latest MacBook Pro. I also have Burkley’s hardshell leather case on my MacBook Air.

Mujjo – whose wallet case I loved on my iPhone 6 – announced a new felt and leather sleeve for the latest MacBook Pro, so I decided to put this to the test. It’s available for both 13-inch and 15-inch models, and is also suitable for the previous Retina machines …

The sleeve is mostly made from thick felt, and this is the only material that comes into contact with the MacBook Pro when it’s inside it. A second felt slot accommodates an iPad. Although there’s a pop rivet on the outside, the rear of the stud inside the sleeve is felt-covered to prevent scratching.

There are many cheap felt sleeves out there, which are incredibly thin and offer a dubious level of protection. The Mujjo sleeve shouldn’t be mistaken for one of these: the semi-rigid felt is thick enough to offer protection from knocks as well as scratches.

The flap is vegetable-tanned leather, with a single press-stud to close it.

The model I tested was black and grey:

There’s a second model with the same grey felt but a tan leather flap:

The sleeve looks smart, but has discreet, understated looks, especially with the black flap. It hasn’t attracted any of the comments that my BookBook and Burkley cases do, but still looks and feels like a high-quality item. The only visible branding is an embossed name on the leather flap.

The quality is evident in the neatness of the double stitching attaching the leather to the felt.

The press-stud has a positive feel, and holds the flap securely closed.

The fact that it holds both MacBook Pro and iPad makes it particularly appealing to me, as my iPad goes almost everywhere with me. When I’m carrying both devices, I can simply slip them into the sleeve and then put the sleeve into my bag. It fits the rear laptop slot of my bicycle bag – which means it should fit most laptop bags – and is easy to slip into my cabin bag when travelling.

As always with leather, it will scratch when it rubs against anything else. I’m used to this from previous MacBook cases, but to me one of the beauties of leather is that it continues to look beautiful even when heavily marked. The Mujjo sleeve has so far only attracted a few minor scuffs, but I’m fully expecting it to end up as marked as other leather items in more extended use.

If you’re looking for something which instantly identifies itself as a premium product, the sleeve may not be for you, as its looks are – at first glance – fairly anonymous. I mentioned that both the BookBook and Burkley cases have attracted admiring comments from people who’ve seen them in coffee shops, on planes and so on, while the Mujjo sleeve has so far slipped under the radar.

But up close, and in use, its quality is evident. I’m confident that it will continue to protect my MacBook Pro and iPad for years to come, and consider it decent value for money.

The sleeve is available direct from the company’s website. You can also find older versions on Amazon at prices ranging from $69.